This update is mainly to fix bugs and make minor adjustments to the game after the Eclipse Revival release!

Our next content update is still planned to release in about 1 week from this bug fix update.

The SMS Security interface has been changed so its now a SMS subscribe for rewards interface.

The reason for this change is that the sms security system was disabled recently due to it not being needed (accounts never get hacked due to the account pin system being so good).

When you subscribe via SMS you will get a free Legendary Surprise Box. 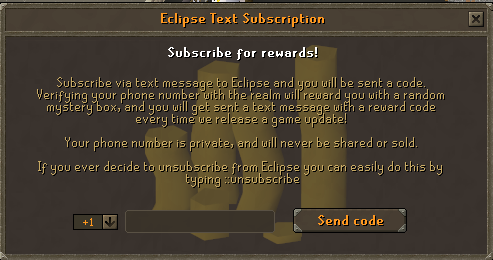 - We have added code for the new Voting Competition being released on October 1st. This code will prevent players from voting and not claiming them, to abuse the voting competition and get an advantage.

- The Realm Exchange has been enabled

-Made it possible to trade Optimum Quiver

- Fixed the attack requirements for Furious Demon and Guardian Archer

Revival Bug Fixes & Changes [Eclipse Arena Fix] - After a few very important bugs were reported, we decided to make a quick patch to fix these issues prior to our next content update.

Revival Update, 3 New Bosses, 30+ New Customs, Everything Reworked - This was the biggest update that any Realm Server has ever seen. This update took our development team over 5 months to complete, with over 500 hours of development put into this.